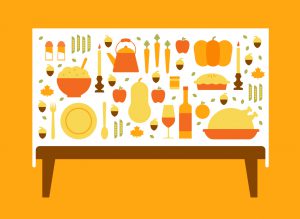 Much like the United States, Canada gives thanks for its good fortune once a year on Thanksgiving. But there a few subtle differences between the two holidays. With three remote employees working from Vancouver, we thought we’d share a little preview into Canadian Thanksgiving:

What are the historical origins?

Canadians had many different Thanksgiving celebrations before the official date was chosen by Parliament in 1957. First Nations — aka the Aboriginal peoples that are neither Inuit nor Métis — had feasts to give thanks after arriving in the new world and to celebrate their crops. After that, thanksgiving celebrations were held to mark everything from explorer Martin Frobisher’s successful crossing of the Northwest Passage in 1578 to war victories to the recovery of the Prince of Wales (later King Edward VII) from illness in 1872.

Mostly, Canadian Thanksgiving is more associated with European harvest celebrations than the arrival of pilgrims in America. It is generally seen as an opportunity to give thanks for what’s good in our lives, celebrate nature’s bounty, and enjoy a meal with family and friends.

When is Canadian Thanksgiving celebrated?

How do Canadians celebrate?

Thanksgiving celebrations can be religious or secular, depending on the observer. Thanksgiving dinner doesn’t necessarily take place on Thanksgiving Day. It could be on any day during the weekend. The big meal is just as likely to happen on Sunday as it is on Monday. Parades are often held and football is also a Thanksgiving tradition. The Canadian Football League holds the Thanksgiving Day Classic, which is an annual doubleheader between four CFL teams.

Even though turkey is the most common meal on Canadian Thanksgiving, it isn’t mandatory dish. Plenty of families have ham, dim sum, chicken or whatever they feel like.

Here are how our three Canadian Lemonheads celebrate:

Cheryl: There are usually a few celebrations during Thanksgiving weekend – a potluck with friends, a “Friendsgiving”, and another dinner with family. Our usual dishes include green bean casserole, turkey and gravy, mashed potatoes, wild rice, corn, stuffing, and pie with ice cream for dessert. Yum!

Lan: Thanksgiving for me has always been a mix of traditional Chinese dishes and new recipes (a couple years ago we pulled off a turducken!).