Steal, Don’t Copy: How Designers Can Learn from Cover Songs

Maybe you’ve heard the maxim that good artists copy and great artists steal. But what does that mean, exactly?

To answer that question, let’s consider the phrase itself. First attributed to W. H. Davenport Adams in 1892, the maxim’s earliest known form was, “Great poets imitate and improve, whereas small ones steal and spoil.”

And finally, when Steve Jobs said the “quote,” he did three things: He made it shorter, more general, and gave it a better (if inaccurate) origin story.

As printed in 1988 in the Sydney Morning Herald: “Steve Jobs said that while [the Macintosh] was being developed he kept in mind a quote from Pablo Picasso. ‘Good artists copy. Great artists steal.’”

(No evidence shows that Picasso actually said that “quote.”)

So with each new iteration, weren’t Eliot and Jobs improving rather than spoiling? Yes. Otherwise, we might remember the great W. H. Davenport Adams.

And with each new iteration, weren’t Eliot and Jobs stealing and not copying? Yes, also true. They stole the best parts of earlier versions.

Eliot stole Adams’ dichotomous sentence structure, pitting the good against the bad, but reversed the meaning. And Jobs stole the meaning of Eliot’s rephrasing, then tightened it up, let all artists in, and increased the value by claiming that Picasso said it first.

Of course, neither Eliot nor Jobs deserves full credit for their improvements. There was no doubt a game of telephone played in between each step, where everyone who heard and passed on the phrase added their own spin.

But what we’re left with is the fact that “good artists copy and great artists steal” is essentially leaving something out:

As part of a design firm, we at Lemonly are constantly gathering inspiration (stealing only the best parts) and building our own creations upon the bedrock of what’s been made before.

But while most of our company is visually minded, I’m in the minority. My role is to develop our interactive infographics, and my background is in music journalism.

So if I were tasked with explaining how a moodboard informs a design, I wouldn’t be able to talk as fluently in visual terminology. I’d have to explain by talking about the metamorphoses of language itself (as shown in that intro above).

Or I’d have to talk about music as a metaphor instead.

And so, for those of you out there who think with your ears more than your eyes, here you go:

To show how to steal but not copy, let’s examine two covers of the Talking Heads’ song “This Must Be The Place (Naive Melody).”

In case you’ve been living under a rock and are therefore an insect that’s developed the ability to read, let me give a primer on the Talking Heads.

Whether he was head-bobbing alongside a house lamp onstage in 1984 or sharing a dining table and vocal lines onstage with Stephen Colbert in 2018, Talking Heads frontman David Byrne has been exploring the power balance between humans’ animal instincts and the societal structures that contain them for decades now.

Pioneers in music technology, Talking Heads were among the best of the bands in the ’80s, not only because they used electronic instruments tastefully. But also because the aesthetic they wore and the lyrics they sang communicated a complex sense of “how do I fit into this ever-expanding world?”

One of their best songs, “This Must Be The Place (Naive Melody)” has been covered quite a bit in recent years by bands like Arcade Fire and Iron & Wine. But on the two ends of the spectrum, I’d say two covers in particular, by The Lumineers and Kishi Bashi, respectively demonstrate how a good artist can copy (nearly everything) while a great artist can steal (only the best parts).

But in order to grade the covers, we have to establish a baseline. So how do we describe the original, and how it’s, um, worth stealing?

Well, let’s get microscopic. From the very start, we hear a plastic rigidity from the drums. The repeating guitar part lends a stair-stepping, up, down, up, down quality, and it’s like we’re marching with an army of toy soldiers, somewhere in the Caribbean.

But then the synth melody comes in, and those sweet, distinctive glissandos give those soldiers some sea legs. During the intro, in between the chorus and verses, you get this wobbly, whimsical feeling that contrasts with the lockstep drum beat.

And the same way you can give an animated character some life by making the eyes dart back and forth minutely, to show inner thought, songs can cross the uncanny valley by adding in little flutters of sound. About 30 seconds in, there’s the first quick paradiddle of bells. It’s the smallest detail — and the first of many like it — but it shows the care put in. It’s like seeing a giant mural of an elephant, then walking up close and being able to count its eyelashes.

Now, when covering a song, rarely will an artist change the lyrics. So while the words are ever-important, in this case, they don’t factor into the way we grade a cover song, and we’ll skip examining them.

The Lumineers: Good, but Not Great

All right, before you close this tab in disgust — “I can’t believe he doesn’t think The Lumineers are great!” — let me just say I love The Lumineers. I was fortunate to take photos of them in 2012 at South By Southwest, and they’ve since blown up to the point where one of their songs was covered itself by the acclaimed Chickeneers on Jimmy Fallon. 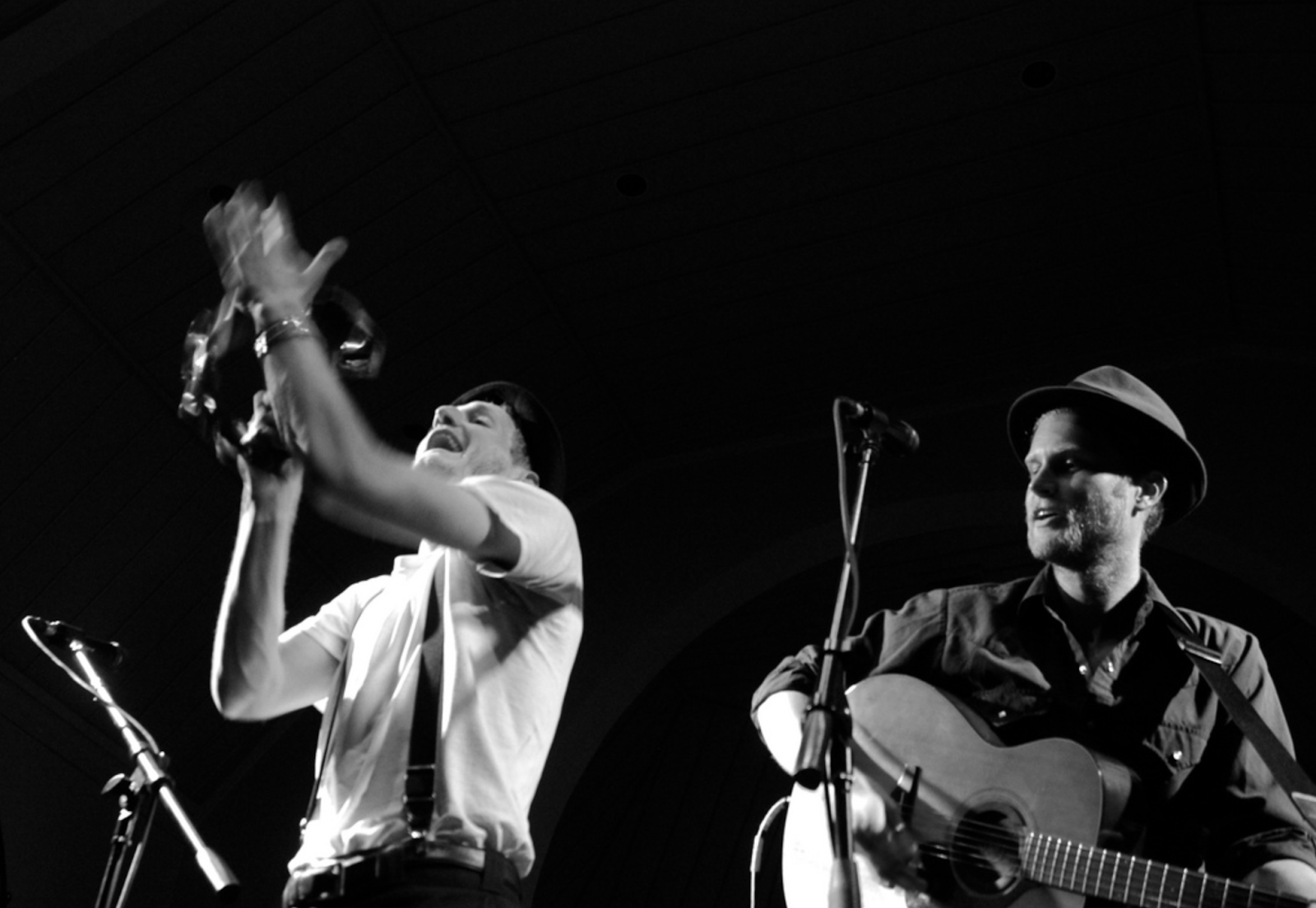 But why isn’t this cover great? Let’s go instrument-by-instrument:

Three chords and the truth: That’s all a country song needs, they say, and if The Lumineers had in fact written this song, they’d deserve acclaim for the lyrics. But since they didn’t, the value of the words themselves doesn’t factor into how good a cover this is.

Instead, we need to review the way the notes are chosen and the instruments are played. So when the guitar part plays three chords over and over, throughout the whole song, with only one variation (a switch in strumming pattern around 1:30) well, that significantly decreases the likelihood that you’ll want to hear this again.

Lead vocalist Wesley Schultz isn’t entirely culpable for the faults in the vocals here. Sure, he doesn’t quite hit all the notes, but additionally, because of the reverb on his voice, those melodic missteps resound a bit longer than they would have with a drier treatment.

The most grating part starts around 3:15 when Schultz stretches for the stratosphere of his range and peters out a bit. Simultaneously, unfortunately, the cello part isn’t exactly in tune either.

Not only does the guitar play only three chords without much flourish to make it interesting, the cello plays only three notes. Do you miss that wobbly synth from the original? Me too.

All in all, The Lumineers stole only the foundation of the original, and the rest was a vague facsimile. Now, if the Talking Heads’ song were a house, do you think you would even notice the foundation? Probably not.

Kishi Bashi: Not Only Good, but Also Great

OK, who is Kishi Bashi? Well, he is not a maker of whole grain cereals and other plant-based foods. That is Kashi.

No, Kishi Bashi is a bit of a mad scientist. With just his violin and a looping pedal, he can create ornamented layers of sound that prick your ears and excite your brain with effervescent pop. And he can be a bit weird, too, devoting at least one entire song to steak.

So maybe it’s surprising, but Kishi Bashi’s cover of the Talking Heads — one of the weirder bands of the ‘80s — is actually fairly straightforward. Employing a string quartet, the song doesn’t veer into any electronically manipulated territories. And it’s a live take, just like The Lumineers’ version, so there isn’t any experimentation with the production of the song.

Rather, it’s the arrangement and performance that make this cover intriguing. So let’s examine the two:

As I said, this cover was written to be played with a string quartet, and the fun part about it is that Kishi Bashi shared the entire score. He also held a contest in which a lucky high school — one Northside College Prep High School in Chicago — got to play the cover, plus another eight original songs, with Kishi at their spring concert.

We know exactly what notes are being played by which instruments. Here’s the Violin 1 melody, for instance, from the beginning of the piece:

That sort of specificity, and the amount of thought that went into how each note would sound against the other notes being played, it makes for a very precise arrangement. Very little is “copied” and in fact, only a little is “stolen”: the very best parts being the essence of the melody. Otherwise, the brilliance of this cover is in its accoutrement or the little additions.

The note to “play very ‘classically,’” for example, is a deliberate choice that takes the song from the Caribbean to a concert hall in Europe somewhere. And it’s just beautiful.

Of course, if these notes are out of tune, then they land with a clang instead of a bang. So props to the cello, the viola, and the two violins. Interlocking melodies are played lovingly, and the articulations of staccato against legato notes is — *pinches fingers as if holding a grain of salt, places against lips, and kisses while exploding hand away* — so good.

And compare the very last vocal “ah-oo” at exactly three minutes in. Kishi makes a masterful jump to the falsetto and smacks that high note. Well done, Kishi, well done.

So, that’s a long explanation, but essentially, an artist steals but doesn’t copy by standing on the shoulders of giants. That’s gotten (and will continue to get) harder and harder as giants stand upon giants stand upon giants. But it’s all the more impressive as the human Jenga tower gets taller and taller. Watch out for the wind!