If you’ve ever visited Lemonly’s HQ in downtown Sioux Falls, you’ve probably met Michael Mazourek. He’s the tall guy with the huge smile, quick to welcome any passerby who enters our office. We don’t pay him extra — he just loves meeting new people and making them feel at home that much. So, you might ask, if he isn’t Lemonly’s official greeter and spokesperson, what does he do? A little bit of everything, from killer videos to incredible illustrations and animations. Michael is Lemonly’s sole Multimedia Designer — here’s what he has to say about his unique role and the things that make him tick.

1. Describe what you do in five words or less.

2. When did you know you wanted to be a designer?

I knew I wanted to be an artist when I was in 1st grade. I’d rent books from the library just to recreate them for myself. In high school, I figured out that graphic design was the most commercial form of art, so I figured I could make a career out of it. 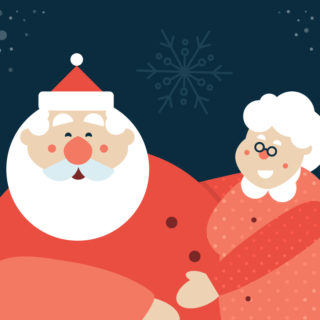 Where Holiday Memories are Made – Marriott

3. If you weren’t a multimedia designer, you’d be a…

4. Your dream design project is…

5. Favorite color and why?

Blue. It once was red — I think. I’m a twin, so everything I ever received was red growing up, and my twin brother got everything blue. Doesn’t everyone want what isn’t theirs? I stole my brother’s color recently… Then I had an existential contemplation about whether red was ever my favorite color, or if I was only taught that it was.

6. What’s the best piece of advice you’ve received (and who said it)?

“The most beautiful sound someone will ever hear is their name.” –John Pohlman

If I meet someone new, I immediately put their name in a notes entry on my phone.

7. The quality in others you most admire is…

Empathy. People who surrender their own wants and needs to listen to and understand the needs of others is pretty admirable.

9. What contribution will you make to the creative community in the next 10 years?

Hopefully an experimental style that mixes all the mediums I work in.

10. What question are you dying to answer that we haven’t asked?

When I was a kid, all my friends wanted to be NFL players. I just wanted to be the artist who designed their uniforms.  They’ve fallen short of becoming burly football players, but I’d say I’ve come pretty close to my aspirations. Through Lemonly, I’ve worked with the Green Bay Packers the last two seasons, creating pre-game infographics. #Blessed