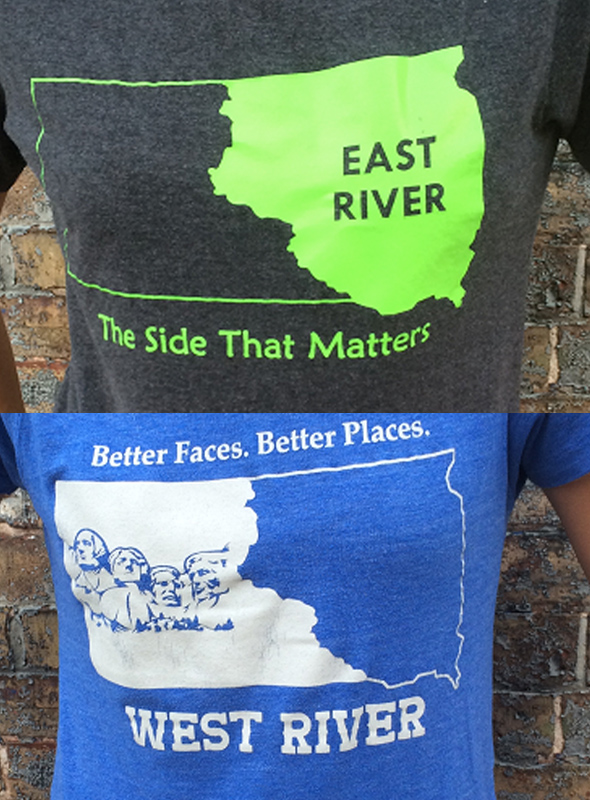 In Lemonly’s home state of South Dakota, the Missouri River bisects the land within our rectangular borders. The river, running wild and true, represents a watery rift that separates us into two discrete halves: West River and East River. If you’re not from South Dakota, you may not be aware of the intense rivalry, but it indeed exists. (There are even shirts to prove it.)

United in principle, we stand divided. It’s the ranchers versus farmers, and the blissful countryside versus the booming metropolis composed by gargantuan, dog-eat-dog cities like Sioux Falls.

But of course it’s not quite that epic. Our cities aren’t vast urban jungles, and our Black Hills are beautiful, yes, but the people who live out west are not one-dimensional. Plus, there exist among us complex stereotype-busters. Just look at Lemonly’s creative director, Amy Colgan.

Amy herself asks for more of a mutual understanding between the two sides. “I have lots of friends and family that live in the Black Hills area,” she says. “Some work on a ranch, some don’t. Respect all of them.”

Since Lemonly is located in East River, and 10 of our 12 South Dakotans are “East River-ites,” our two West River employees are usually the minority in the west vs. east debate. To show our respect for West River here at Lemonly, just one manifestation of our efforts to appreciate the diverse personalities that comprise our team, we asked Ryan and Amy a few questions to help us further understand their West River roots:

What do you miss most about living in western South Dakota?

Amy: Hillllllllls! Not saying eastern SD isn’t pretty, but man is it flatsville.

What do you treasure about living here in Sioux Falls that you couldn’t get back home?

A: Sioux Falls has changed and grown just in the five years I have been here. It’s exciting to be a part of that. We did get Ed Sheeran to come to town, so that’s amazing.

Also, East River knows how to do street dances.

R: Weeknight live music, dear friends, and a plethora of great golf courses. A lot of professional business takes place in eastern South Dakota, and it’s nice to be in the middle of it.

What are the stereotypical traits of someone from West River, and why are they generally wrong or right?

A: People assume everyone’s a cowboy. While farming and ranching are a big part of the landscape and culture, most residents are just like your ordinary East River folk. We do rock more cowboy hats and legit cowboy boots than our eastside neighbors, though.

R: There is a stereotype of people from West River being stuck in their ways, extra conservative with an independent streak and weary of anyone not from western South Dakota. The stereotype is not wrong.

Give me an example of someone you respect who defies the stereotypes. What are they like, and why do you respect them?

A: Basically everyone I know. I have lots of friends and family that live in the Black Hills area. Some work on a ranch, some don’t. Respect all of them.

It seems like those from East River South Dakota have more reason to visit West River than eastern Nebraskans have to visit western Nebraska (the post’s author and interviewer, Michael Todd, is from Alliance, Nebraska, and attended college in Lincoln). Namely, Mount Rushmore. Have you found that friends from East River have at least been to West River?

A: Yeah, everyone goes out to the hills for vacation. They have to admit that area trumps anything else in the state, but the common response is “they like to visit, not live there.”

R: They have. Some have visited the hills as tourists, but many take advantage of the hills for skiing, hiking, snowmobiling, and great golf. It’s a great place to vacation for sport and equally as great to relax.

How do you think visiting affects perception, and are people generally missing something when they visit only the main attractions?

A: It’s obviously beautiful country, but many of the sites and attractions do play up our “old west” roots. It’s fun and kitschy, but you can miss out on the variety of people and places. Perfect example is Art Alley in Rapid City. I bring friends there. They love it and are always shocked at how cool it is.

R: Not everyone from western South Dakota visits the hills, goes skiing, or parties in Deadwood. Most of my friends and family were busy with their lives, working on their ranches, or making a living. The tourist gets a much different picture of western South Dakota than the average West River resident.

Now, which is better: West River or East River. Why?

A: Black Hills are really hard to beat, so I’ll say west is best. Deadwood, Spearfish Canyon, Sylvan Lake and countless other places. However, I don’t have plans to move back. I loved growing up there and enjoy visiting, but I have other places to see. I’d add I enjoy living in Sioux Falls so much more than I thought I would. It’s a fantastic place to be a young professional (#DTSF). If given the option today, I’d pick living in Sioux Falls over living out West.

R: Dumb question. How do you beat George, Abe, Thomas, and Teddy [on Mount Rushmore]? How do you beat Terry Peak and Deadwood? Buffalo, mountain goats and elk. East River has… The Event Center? Good Earth State Park? The Big Sioux River? Oh, let’s not forget the Corn Palace.