Welcome To Sioux Falls, From The Air

In July, there were 14,296 takeoffs and landings at the Sioux Falls airport.

It often takes 10 minutes tops from the terminal’s front door to your gate, but our little regional hub sees quite a few planes.

For Wes Eisenhauer, whose office for The Breaks Coffee and his own photography is in the flight path for one of two landing strips, the opportunity was clear: Let’s paint a welcome sign on our roof.

In late April, Wes — whose wife, Becca, works as a project manager at Lemonly — approached us with the idea. Designer Molly O’Connor provided a handful of options, and by mid-June, with the help of Isaac Show, Zach DeBoer, and Joe Hubers, the roof was painted, filmed, and ready to greet alighting residents and visitors.

To get the bird’s-eye view of the project, I sat down with Wes.

Let’s start by talking about the initial idea to paint the roof.

So it really dawned on me, we took that workation in California, and on the flight home, I had a window seat on the left side of the airplane. And when you’re hanging out on the airplane, coming into Sioux Falls, you’re looking for landmarks.

We were coming this way over downtown, and I just saw our spot perfectly from a long ways away. And it just dawned on me: flat black roof, 100 planes a day go over, and I was just like, light bulb, how could I paint something up there.

Originally, I was like I’m going to get a gallon of red paint and roll some archaic message. Then bringing it up, started to refine the idea. We know enough people in the design world to make something a little prettier than a rolled-on red-letter message.

I ended up reaching out to John (Lemonly CEO). I was like, “Hey man, I got this idea. It’d be fun to have one of your designers collaborate on it.” So Molly (O’Connor) whipped up a few designs. I said this is what I’m feeling, we talked color schemes. 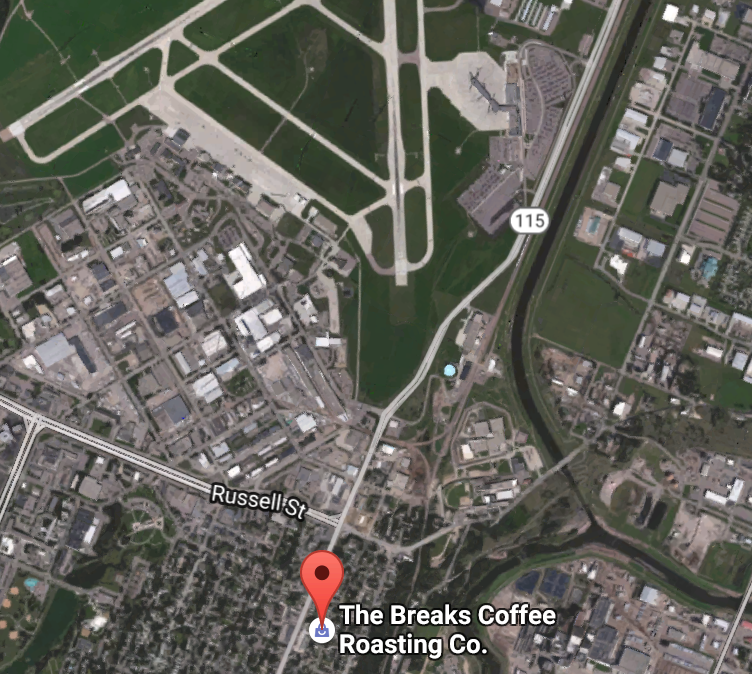 Then I reached out to Zach DeBoer (who owns Exposure Gallery & Studios in Sioux Falls) about how we execute this. He helped me with the logistics. I reached out to Sioux Falls Paint & Decorating, told them my idea, sent them some drone footage of the roof and my idea for the video and promo piece, asked if they’d be interested in donating the paint, and they said yeah, absolutely. Got all that lined up.

Then one week, Zach, Isaac and I sat down and were like, “Monday, we’re gonna go up there and we’re gonna do it.” We made it into 12 squares, like a grid, snapped chalk lines, chalked it out rough, then started rolling on paint.

And it took about… we got up there about 8 a.m., and we were probably done by about 4 p.m. Once we started, it was a full day. I was wearing these shoes with no socks.

When I got home the night after, I had to ice my feet because they were burned. I’m an idiot for not wearing socks. My feet like melted into the soles.

So that’s the rough overview: saw it flying in and just went with it.

People have painted their roofs before. There’s the one in Milwaukee that says “Welcome to Cleveland” and one in Seattle with giant spiders. Talk through why you went the more earnest and actually welcoming route.

I don’t know. I never considered any other message, I guess. It just seemed appropriate. It’s so close to the airport, and I just felt it was a good way to do it. It feels like this is the last thing you see before you hit the runway. It never occurred to me to do anything but “Welcome to Sioux Falls.”

It’s one of those tangentially promotional pieces. There’s nothing about The Breaks or your photography, so could you talk through the marketing side, how you saw it and how it works for you?

One, I just thought it would be a cool thing to do, but I certainly had the marketing piece in mind throughout. Some people were like, “Why don’t you put a giant B up there for The Breaks.” I was like, “Eh, it just seems cheap in a way.”

“The best marketing is when you don’t know you’re being marketed to.”

I look at it that way. I also want to be the people who say, “We are the ones who are welcoming you to the city: our culture is here.” If no one else is gonna do it, I like the idea of we’re the ones who are saying welcome to Sioux Falls.

We’re the ones really planting our flag and making this a better place, along with tons of other people. So I figured that would trickle down to my business. If people wanted to look into who did it, that I’m a photographer, or that we roast coffee, it would become apparent to people interested in what was going on here.

Do you know the reach of the video? It was posted a couple various places.

I uploaded it originally natively to Facebook because as we all know Facebook squashes YouTube. So that did like 100,000 views in two days. That was the initial push. I teased it on Snapchat as we were doing it. Then I did Vimeo and posted it to Reddit, and I think it’s done a quarter million on that. So we might be around 350-400,000 views. And I licensed it, too. I got hit up by people who were like, “I saw your video on the morning news.” 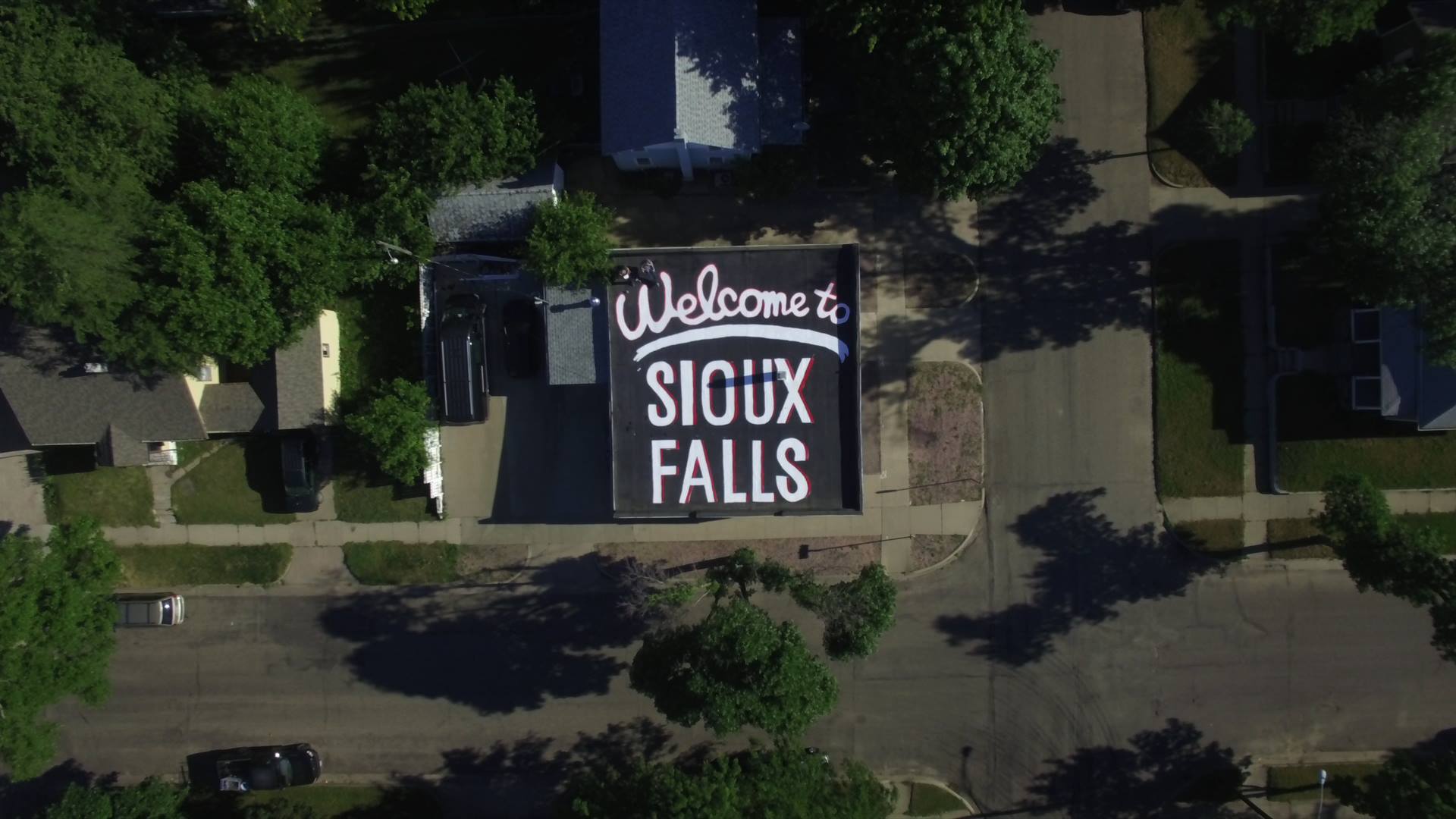 Do you remember how many gallons of paint it took?

It was three gallons of white and one gallon of red to do the drop shadow. And on the advice of the paint guy, ‘cause I was like, “What do we use to hold up to weather?” We actually used swimming pool paint because it holds up to water.

I’ll probably update it every year in some way, shape or form, just give it a touchup or build on the design and give it a facelift once a year. We’ll see how it holds up over the winter.